I'm now getting back into my stride after the break (which seems like an age ago), and the lack of activity on Paleo Illustrata is a consequence of the number of things I have on the go at the moment. Many of these projects will provide blog material, and I'm hoping 2012 will be a very busy year for me palaeontology-wise. There's so much to look forward too like fieldwork, the possibility of attending the next SVP and the continuing personal projects I am always busy with. I also need to earn some bunce to pay for all this! 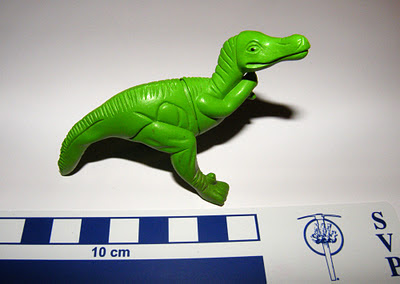 Yesterday I was rooting around in a charity shop in town when I came across this little geezer in a box full of toys, and as he looked balefully up at me with those little green eyes he seemed to say "take me home Stu" so I liberated him from the toy box for the princely sum of 20p. I think he's supposed to be a Velociraptor but he looks rather like a Baryonyx too, so I've called him Raptoronyx. He's a tad more stylised than most toy dinosaurs and despite some rather glaring anatomical inaccuracies (the hands aren't pronated though) I rather like him, and he now lives on my desk alongside an R2D2, a Papo Stegosaurus, Morph, George from Rainbow and the monkey from the PG tips advert.
Posted by Stu Pond at 17:06

Email ThisBlogThis!Share to TwitterShare to FacebookShare to Pinterest
Labels: Raptoronyx