Portrait of a T. rex, or why I love Stan.

It's strange how you can develop an attachment to an animal that lived on another continent 65 million years ago, but I've done just that with a Tyrannosaurus rex called Stan. 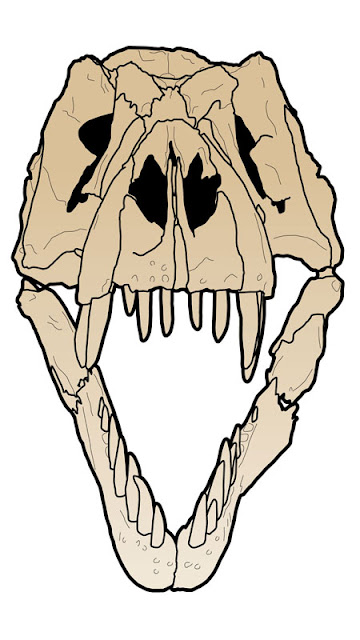 Stan seen from head-on.
Illustration © Stuart Pond. 2011. Stan is a trademark of the Black Hills Institute.

Some years ago palaeontologist Dr. Phil Manning arrived at Manchester Museum and set about re-invigorating the fossil galleries. The centrepiece at that time was a Tenontosaurus skeleton which had seen better days; it was in need of a a bit of t.l.c. and had some dodgy restoration on it, so off to the lab it went. With characteristic vision and enthusiasm Phil decided to replace the old ornithopod with something altogether more dramatic, a full-size Tyrannosaurus rex in a controversial running pose. So a cast of Stan, a nearly complete T. rex from South Dakota was installed into the fossil galleries, posed so when you round the corner into the hall the beast looks like he's about to run you down (we assume Stan is a 'he' as he is the gracile form of the species, and with T. rex the robust morphotype is considered the female); A T. rex at full-tilt. Over the years Mrs Stu and I have often gone up to the museum to see Stan, to gain inspiration in the long months between actually getting out into the field, and dreaming of visiting the Hell Creek where he was found to see for ourselves this great fossil locality.

The Black Hills Institute, Hill City, South Dakota.
Stan was named after Stan Sacrison, an electrician and long-standing collector who found him in S.D. in 1987. Although he wasn't excavated until 1992, Stan turned out to be the most complete male T. rex ever found. The original fossil now resides with the Black Hills Institute (who found Sue, now located in The Field Museum, Chicago after a traumatic and protracted legal battle now famous in the annals of palaeontology), located in Hill City, S.D. As we were in the area last year after spending a week in the field in the Hell Creek we had to make the pilgrimage to see the original fossil from which the Manchester cast was taken. Sure enough, we rocked up in Hill City one bright sunny July morning and proceeded to the BHI museum. To see Stan in the, er, flesh was a surprisingly emotional experience; it was like meeting a famous artist or musician who you'd long admired and found inspirational. We spent a very happy couple of hours in the BHI's small but perfectly formed museum, carefully studying all the exhibits we had travelled so far to see, but paying special attention to the star of the show, the mighty Stan. The Tenontosaurus that once held pride of place in the fossil
gallery at Manchester Museum. Note no Deinonychus present.
So at the top of the post is an illustration of Stan by myself. It's taken from a photo of his skull which I took whilst at the museum, and was created entirely in Adobe Illustrator, the vector graphic programme. This is obviously a simplified image, really meant to try to communicate the dramatic experience of standing eye-to-eye with that most iconic of dinosaurs, T. rex.
If you're any where near Hill City I would highly recommend a visit to the Black Hills Institute to visit Stan. In the meantime, we'll be off to Manchester any day now to see him dominating the fossil hall, bearing down on the awestruck visitors come to gaze at his mighty self.

Please note that Stan is a trademark of the Black Hills Institute.
Posted by Stu Pond at 16:30 No comments:

Last week saw a milestone in this man's journey into the art and science of palaeontology as one of my illustrations was used in a poster presentation at The Geological Society of America's annual meeting. The poster was presented by Douglas Hanks, Bruce Erickson and Scott Haire and is entitled 'Vertebrate Remains of the Late Cretaceous of South Dakota and Minnesota'. Abstract is here. 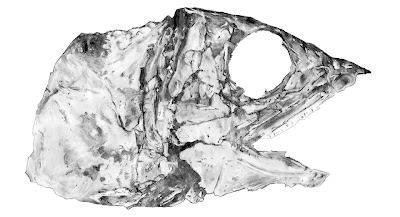 Image © Stuart Pond. 2011
The illustration was completed under the direction of Doug Hanks, palaeontologist with the Marmarth Research Foundation and Science Museum of Minnesota, and is the skull of the fish Pachyryzodus. The image is rendered in graphite.
Posted by Stu Pond at 13:38 No comments:

Palaeontological Illustration: Petrifactions And Their Teachings

One of my favourite palaeontology books was a gift from my wife for my birthday, an original copy of Gideon Mantell's handbook and explanatory catalogue of the Gallery of Organic Remains of the British Museum where these specimens were originally house before the construction of the Natural History Museum in South Kensington (Owen's edifice being completed in 1881, some thirty years after this book was published). Mantell is one of my personal heros and this marvellous book is a fine tribute to his ability and insight as well as his passion for his subject.

The illustrations are all black and white and no credit is attributed to the artist, however as the book was published by as part of Bohn's Scientific Library it's possible they had their own illustrators work on the plates, or they were sourced directly from the British Museum itself - more on that subject later. The images are all line work and are crisp and clear, with the details of fossils picked out and unfussy diagrams and reconstructions. Here is a small selection of the images I find particularly inspiring: 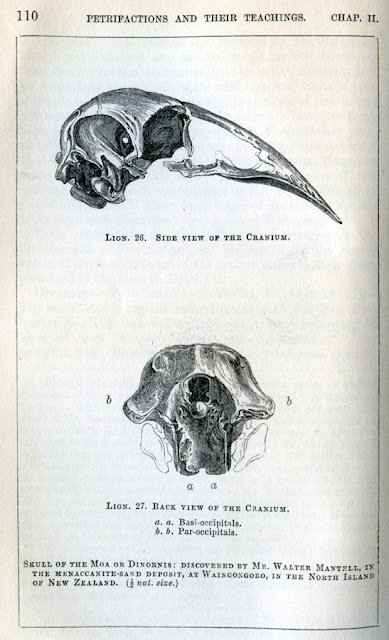 Skull of the Moa, excavated by Mantell's son, Walter in New Zealand. 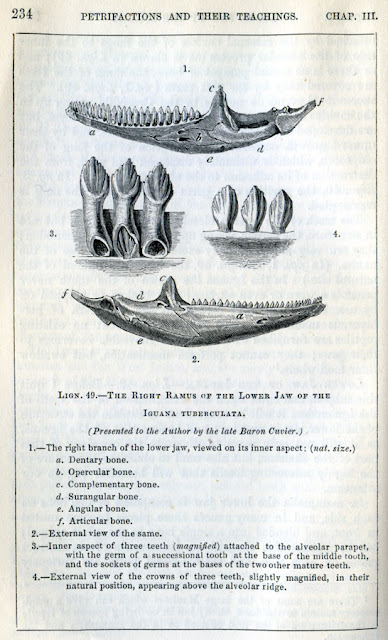 Iguana lower jaw and teeth. This was part of the section on Mantell's beloved Iguanodon in which he compares the teeth of the reptile with those his wife Mary (so the story goes) found near Cuckfield. The specimen illustrated was presented to Mantell by Baron Cuvier. 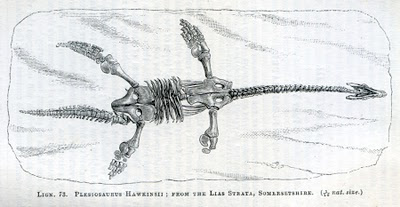 Plesiosaurus hawkinsii. This specimen was recovered from a quarry in Street, Somerset by Thomas Hawkins after he had fled London in 1831 when Cholera arrived in the city. He gives a harrowing account of the situation in the capital ("what havoc and death!") before detailing his trip to Somerset across the Mendips (which he endearingly describes as "The British Alps", presumably having never seen Snowdonia, the Highlands or the actual Alps) on the Bath Mail coach. Much to his intense annoyance he found the specimen had been smashed to pieces by the quarry workers despite giving a quarryman named Creese a retainer to keep any bones he discovered with whilst quarrying. Several pieces had been lost, but Hawkins gathered the remainder up, "forgot the pestilence" and spent the next two months day and night prepping the piece, which he called his "hewn-god".

The superb Belemnoteuthis antiquus (modern spelling is Belemnotheutis) illustration, showing the soft tissues of this specimen. In 1843 Richard Owen misinterpreted some of the structures of this fossil, and concluded that this was a belemnite and not a separate genus. He then wrote a paper, named the species after himself and failed to credit the original amateur palaeontologist (one Joseph Channing Pearce) with the discovery. Five years later Mantell presented a description of Belemnotheutis fossils recovered by his son Reginald (who had been involved in the construction of the Great Western Railway) to the Royal Society proposing that Belemnotheutis was indeed a separate genus as originally thought, and Owen had got it all wrong despite receiving a Royal Medal for the paper (information gleaned from wikipedia). Unsurprisingly, Owen was unimpressed and Mantell was forced to defend himself publicly and Mantell alludes to this in a footnote in Petrifactions and Their Teachings. Interestingly, the wikipedia page for Belemnotheutis credits this drawing to Samuel Pickworth Woodward, but I have not been able to verify this. Woodward was First-class assistant in the Department of Geology and Mineralogy at the British Museum between 1848 and 1865, so all these illustrations could conceivably be attributed to him.

Mantell's footnotes provide wonderful insights into his life and the life of those collectors and scientists he so admired. His feud with Owen (at one point Mantell states "but alas! to doubt Professor Owen's infallibility was a deadly sin, and I have no hope of forgiveness!") was one of the great clashes of personality in the history of palaeontology.

Petrifactions and their Teachings was published in 1851 and a year later the 62 year-old Mantell, disabled and wracked by the pain of injuries sustained in coaching accident years before, died of an opium overdose. Owen had part of Mantell's spine removed, pickled and stored at the Royal College of Surgeons. It was destroyed in 1969 for lack of space.

The wonderful illustrations in this book are a fitting tribute to one of the fathers of modern palaeontology, and should provide continuing inspiration to those who hold the craft of scientific illustration close to their hearts.
Posted by Stu Pond at 18:03 No comments: 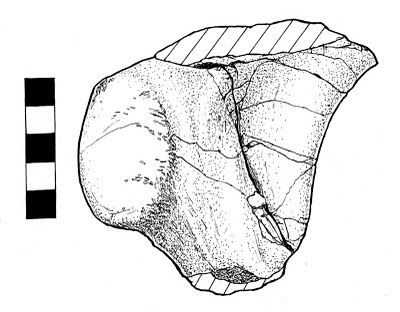 This is a drawing I intended to use in a publication but wasn't submitted for reasons beyond my control but I thought it worth posting as it's pure scientific illustration.

The figure is of a partial atlas vertebra, probably from a large Iguanodon bernissartensis and was found on the foreshore of Compton Bay on the Isle of Wight, UK. My wife and I went onto the beach one morning and she set off to walk the dog whilst I mooched around the rock pools looking for dinosaur bones. After an hour or so of fruitless searching I espied them coming back, and I walked out to greet them. Just as she stopped, she bent down and picked this fossil up at the same time asking "Is this anything?". She always finds the best fossils, seemingly without looking too hard.

I must revise my search image.
Posted by Stu Pond at 15:30 No comments: