BBC - How Do You Build A Dinosaur?

Just a heads-up about this programme that is being shown on BBC4 tonight which is discussing how dinosaur restorations and displays are constructed and the science behind them. Sounds interesting!

How Do You Build A Dinosaur?
Posted by Stu Pond at 11:54 No comments:

The BBC website has a short interview with Nigel Paterson, producer of Planet Dinosaur talking about the science behind the programme. Nothing revelatory here but a chance to get a glimpse of the production process and the work done by the 3D artists.
Posted by Stu Pond at 09:48 No comments:

As I'm the only person in the paleo blogosphere not to have seen Dinosaur Revolutions and feeling somewhat left out of the whole 'new dinosaur programme on telly' vibe of the past few weeks, I was pleased to settle down last night and watch the first episode of the BBC's new offering, Planet Dinosaur.
More knowledgeable people than I have commented on the accuracy and behaviour depicted elsewhere so I'll concentrate more on the work of the artists. Suffice to say the mawkish anthropomorphism that pervades many of the recent additions to this genre was not evident here much to my relief, and there was science behind the displayed behaviour for the most part. For a fine review and discussion on the morphological details head over to Love in the Time of Chasmosaurs which has a good debate going on, including input from one of the production team.
As commercial artist and animator myself I was watching with one eye on the 3D and motion graphics all the time, and I thought these were both excellent. There were some issues, such as the time-traveling Ouranosaurus looking a little lacking in mass when walking on all fours (not too sure about the skin texture, which looked a bit plasticky), and the occasional odd footfall but these are minor niggles. For the most part the CGI was a joy to watch, with skin following muscle deformations and wobbly bits looking, er, wobbly. The close-up shots were outstanding and I really enjoyed some of the particle effects (many presumably done in post), and a big shout out to whoever did the sand particles when the feet came down - very effective indeed. The theropod's heads were suitably scaly and battle-scarred and the excellent Spinosaurus was a good choice for the episode's main protagonist. Highlights were the shots of him swimming and his tug-of-war with the Carcharodontosaurus for the hapless herbivore's carcass and the attack on the pterosaurs (who were in the nip! Whither fur?).
The camera work was of the hand-held-in-a-battlezone type so beloved of gamers and producers of CGI these days and although no wildlife cameraman would ever film a subject like that for fear of inducing motion sickness in his audience it added to the sense of drama, as did the camerawork during the fight sequence with it's slow-mo/hard cuts/bullet time feel. As ever, the devil is in the detail and the detail was not ignored; camera lenses were splattered with blood and drool (often at the same time - good call whoever thought that one up) and debris flew from the feet of running dinosaurs.
All of this was backed up with motion graphics explaining the rationale behind the behaviour shown and showing - gasp - actual fossils. Deep joy! John Hurt's narration was pitch perfect as you'd expect and added a certain gravitas the the proceedings.
One thing though - we really need to come up with some new sounds for dinosaurs. The Ouranosaurus were portrayed making ungulate-like vocalisations and the predators growling with lion/croc/bear style mashups. This is fine, but I can't help thinking that perhaps we could move this on a bit now.
The firm who created the shots for the programme, Jellyfish Pictures worked very closely with experts (including Scott Harman and one of my old tutors from Birkbeck College, Charlie Underwood), which I think is reflected in the quality of the models. Reading the article in 3D World magazine, it becomes apparent that the team worked hard to get as much of the science in whilst making the programme interesting, and on time and within budget too. This sort of work is not cheap, and is time-consuming and I think the team have made an excellent programme given the constraints; 2,100 CGI and 700 mograph shots in 17 months, to this standard is impressive stuff and we should be applauding the BBC for commissioning this sort of science programme.
So, much to look forward to in the next episode.
Posted by Stu Pond at 12:19 No comments:

You'll recall from the last installment of this occasional series that before starting any actual modelling we needed to do the research. With that done, we can now start modelling Triceratops in earnest.

I use Cinema 4D for all my 3D work but the techniques I use are common to most major 3D modellers, with one notable exception, the mighty ZBrush which we'll cover later in the series. How you set up your production pipeline is personal to each individual and company, but mine is as follows:

Before starting modelling I set up Cinema 4D (c4d) so I can model without having to stop and fiddle with lights etc along the way. So I create a basic matt pale grey texture, construct a standard 3-light setup (I actually have a master file I can import these elements from each time I start modelling) and finally add a floor for the model to stand on.

I then import any images I am going to use as reference for the model. This could be sketches, photos etc but in this case it's the skeletal Scott Hartman kindly gave me permission to use. I set this up in one of the views (in this case front) and use this as a guide to the proportions of my model. 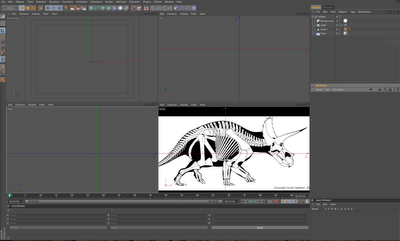 Figure 1: The modelling environment; now all I need is a dinosaur to go in here . . .
Now we can start modelling. Luckily for us 3D modellers tetrapods display bilateral symmetry, which means they are they have the same layout on either side of the sagittal plane (see fig. 2). We too can use the sagittal plane as the axis for generating the mesh that will make up our model. 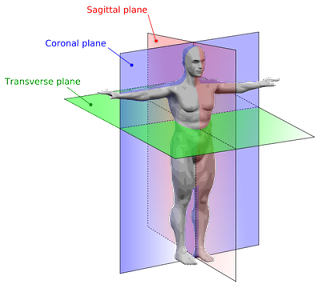 Human anatomical planes. As humans and dinosaurs are both tetrapods we can use
this scheme to assist in modelling our Triceratops. From here and used under
Creative Commons Licence.
To do this I use a symmetry object in c4d. This means any geometry created or modified is reflected along the chosen axis to create a whole model. By positioning a cube primitive with one side along this plane we can model one side of the dinosaur and the other side will be created automatically. Figures 3 and 4 show how this works. 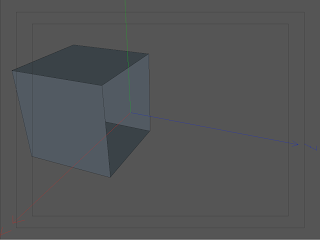 Figure 3: A cube primitive aligned along the X-axis in c4d. The polygon against the axis
has been removed to make sure hypernurbs work correctly. 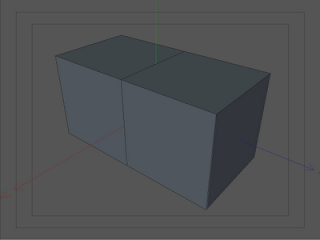 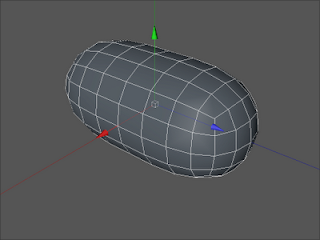 Figure 5: The basic cube shifted so one edge aligns with the XY axis, dropped in a symmetry object
which is then dropped into a hypernurbs object.

Figure 6: The hierarchy of the basic starting mesh.
The hypernurbs and symmetry object can be turned off and on to help with modelling and previewing and you'll find yourself doing this constantly as the model progresses.
The technique I use for modelling is very simple. Extrude a polygon, adjust the points, extrude another and so on. Starting from this five-sided cube (remember we deleted the poly that is flush to the sagittal plane) we can create any shape we want. In the case of virtually all models including our dinosaur we want to rough out the body shape before we start getting to involved in detail. This basic rule of thumb, start simple and refine down gradually, and this needs some careful forward planning. Our dinosaur is basically one large, complicated shape and our mesh will end up as one large, complicated shape too. So we don't get lost, we need to pay close attention to the anatomy of our subject. We need to allow for the head and it's appendages, the limbs and their morphology and such details as the number of toes, the shape of the tail and so on. Where do the legs join onto the body? How does the neck articulate? How does the tail move? Think of these things before you start and the whole mesh as being divided down into ever smaller boxes and that's pretty much how the modelling process for this stage works. 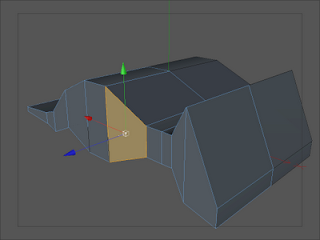 Figure 6: Roughing out the body shape. This is the very basis of the model. I've extruded more
polygons from the original cube we started with and have begun to form the shape of the head,
body and tail. You can see I've not adjusted the Z co-ordinates at all, at this stage I'm only interested in
roughing out the form along the X and Y axes. The highlighted polygon will be where the shoulder
and front leg of the animal will be modelled.
So that's the start. Check out online tutorials for your specific modelling application for other techniques that will be of use as you progress, but remember the mesh has to be a single object, preferably made of polygons. Be thrifty in your use of polygons as we want to keep the polygon count as low as possible as they will soon mount up, and if we want to animate then lots of polygons could be problematic.
One more thing - don't move the points on any of the polygons on the X/Y axis (the sagittal plane) of the model, as this will create gaps in the symmetry later on, and you final model will have holes. Keep checking everything's in order by flicking on the symmetry and hypernurbs as you work, and correct any errors as you go along - do not leave them for later or you might get in one awful muddle.
Posted by Stu Pond at 16:45 2 comments: