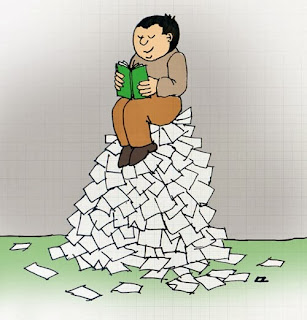 It's a funny thing, life. At any one moment everything can change and your outlook is altered and new horizons open up as old vistas fade into the distance. On day 14 of being a doctoral candidate I feel this process as it is happening and a new reality hoves into view; the life of the palaeontologist and already it's quite obvious my routine outside of my day job is changing rapidly. After detailed discussions with both of my supervisors I am now constructing a framework for my research, and considering some of the practicalities of the process of actually doing a PhD.

First amongst these is the literature review. I have already been collecting the relevant literature around my key research subject, the nodosaurid Polacanthus foxii. Recent years have shown an increased amount of interest around Early Cretaceous ankylosaurs and this work will provide the structure in which my own research will sit. There's lots to do, and plenty of specimens to see in the UK alone so I'm looking forward to getting into the various collections to examine their fossils. I'm also hoping to look at all Early Cretaceous thyreophorans to compare material, and there are constant rumours of finds by collectors that might warrant further investigation.

Of course planning a literature review is a project in itself and there is plenty to consider when setting out on such a large undertaking. Aside from the process of selecting, reading and annotating the core literature there are also the practical matters of organising and structuring this library, with directory structures, naming conventions and the effective and efficient filing of notes and references to deal with. Here I can fall back on my own commercial experience as a motion graphics artist and animator as many of the projects I work on have large amounts of assets in the form of scripts, visual and written reference material as well as often very large amounts of data (sometimes 100s of gigabytes) and files generated during the production of a complex animation, and I have developed a system and directory structure that I can adapt for my research.

Then there is the subject of annotating the papers themselves. Should I pile them all on my iPad and use an app such as iAnnotate? Should I write in a book or use and index card system and type up onto the computer? Which is the best for data integrity and security? If the electricity goes off, could I still work? How do I keep my bibliography up to date and accurate?

There's plenty to be going at, and there's not a moment to loose in implementing a system so I'd better crack on. I'm sure any procedure I put in place for conducting my literature view might change over time, so I want to keep it as flexible as possible without sacrificing efficiency and most importantly, a method of keeping accurate notes and refs making papers quick and easy to locate.

Today is the first day of my Ph.D, and I'm pretty excited (as you might have gathered from my previous posts and tweets). I always find new year to be a time of optimism and anticipation, with the festivities of Christmas and New Year's Eve behind us* and the opportunity to get stuck into work without interruption ahead. Of course, the fact I'm now studying part-time with Ocean and Earth Science, National Oceanography Centre Southampton is an added thrill, and the fact my research will be on dinosaurs makes it about as good as I could ever have hoped for.

So what am I actually working on? This extract from my project proposal will answer that question:


Digital reconstruction of dinosaur movement and soft tissues informed by morphology and biomechanics.

The ornithischian dinosaurs within clade Nodosauridae have been known from the fossil record since the dawn of modern palaeontology, and their presence on the Isle of Wight was confirmed by the discovery of a partial specimen by the Reverend William Fox of Brixton (now Brighstone) in 1865 (Blows, 1996). However, despite a number of partially complete specimens, the biomechanics and functional morphology of these obligate quadrupeds has not been subject to the same degree of study as other dinosaurian taxa. Two notable exceptions are a finite element analysis of ankylosaur tail club impacts (Arbour and Snively, 2009) and a more general functional investigation of ornithischian limb morphology (Maidment et al, 2012). The reconstruction of nodosaurid and more derived ankylosaurian morphology, and locomotion, however, remains to be achieved in enough detail to interpret the lifestyle, and palaeoecology, of these extinct animals. Doing this, within a rigorous comparative and statistical framework, is the aim of this PhD project.

So big spiky thyreophorans will be at the core of this project. In addition, I will be drawing heavily on my experience as a 3D artist and animator to create accurate reconstructions of how these dinosaurs moved. I have a huge amount to learn, and recognise that I will need to address some gaps in my knowledge quickly, but then I'm I'm studying for that very reason.

So I've stepped onto the path, and now to see where it takes me. I really can't wait to find out.

Best wishes to everyone for 2014, and I hope perhaps I'll see you at a meeting or on a field trip at some point in the year.


*Not to moan or owt, but some of us spent the festive period ill. Cough.