Crikey. Tempus fugit and all that. Following my trip to the University of Southampton to give a scientific illustration and photogrammetry workshop, I seem to have become ultra-busy. Whilst down south we popped over to the Isle of Wight and I spent a couple of days in the field and Dinosaur Isle collections and recorded several foot casts, found some vertebrate fossils and looked at  and recorded using photogrammetry the stratigraphy of one of the sites we are working on.

In the meantime, I have made some progress with the Triceratops reconstruction that I think is worth sharing. This involves taking the model into zBrush where I can start to sculpt the form using the polygon mesh as the base, adding detail and refining the anatomy. In the case of Triceratops I wanted to look closely at the manus and forelimb posture, as many times the configuration of the forelimbs is presented wrongly. Fujiwara (2009) covered this subject in an excellent paper and this is the basis for my reconstruction.

Once more, I am working on half of the model and I'll mirror and weld these two halves at some point when the bulk of the sculpt is completed, and then I will add progressively finer detail to the mesh. 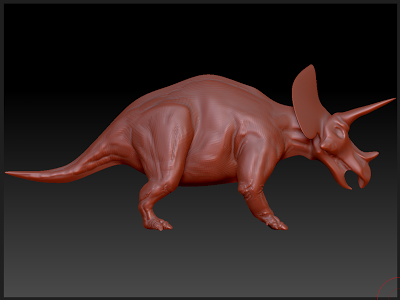 I've been adding muscle definition from the research shown in the last post and have started bulking out the gut region to give the animal a bit of a belly. It's still early days yet, and there's the issue of integument and other soft tissues . . . but that's for another post.