The Universe is Within Us...

. . .  and we are within it. Following on from my previous post Threads in deep time; reconnecting with who we are GrrlScientist posted a thought-provoking piece of footage of Neil deGrasse Tyson, an astrophysicist and director of Hayden Planetarium discussing life in the universe on her superb blog Punctuated Equilibrium (just in case this can't be accessed from some localities, here's the clip on You Tube). Several comments he made were pertinent to the subject of my previous post so I thought it worth flagging here.
Posted by Stu Pond at 16:59 No comments:

Building a dinosaur - the research

Firstly, an apology. It was my intention to make the centrepiece of this blog the building of a dinosaur in 3D, but the old adage of the best laid plans of mice and men is relevant here as my plans were rapidly overtaken by events . . .

Originally, when I decided to model Triceratops horridus I had decided to use a certain leading artist's skeletal reconstructions in order to get the morphology correct. I wrote requesting permission, got no reply and then the storm broke and all hell broke loose, as I did not receive permission I had to rethink my approach. I'm not really interested in entering the debate on the usage of other people's skeletal reconstructions and if they don't want to give permission you have to respect that; if that material is actually scientific data or art is another matter. Luckily, Scott Hartman very kindly gave me permission to base my reconstruction on his excellent skeletal drawing of Triceratops (reproduced below with permission). Were this for commercial work, I would be paying Scott for this usage. However, the problem did focus my mind on the issue of how to model dinosaurs in 3D when you are struggling for reference. Luckily, there are reams of information out there that is freely available and so all is not lost. Also, if you can locate a skeleton within travelling distance then making your own reconstruction has to be the answer. As it happens there isn't one within easy travelling distance for myself although I am hoping to visit Oxford University Museum of Natural History and photograph their Triceratops specimen and use that as the basis for a reconstruction of my own. One problem here is that as an un-degreed, unaffiliated and basically lone amateur palaeontologist/artist it seems you are sometimes not taken seriously as a researcher by museums and this can be a real problem.

Of course I have been fortunate enough to travel to several of the world's great natural history museums and have photographed many skeletons there, although not with the purpose of creating skeletal reconstructions. This material is useful in itself and can be gathered and pinned to boards (in the mograph business we call these collages moodboards as they can give an overall feel for a project and often contain images not directly related to the subject but that might indicate a feel), walls or kept in files as reference; in my opinion you cannot get to much reference. 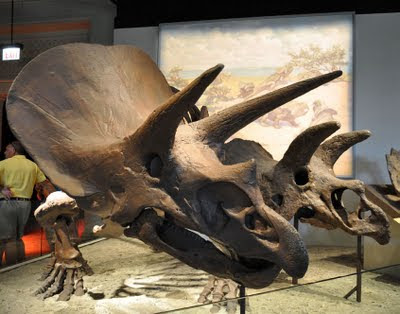 Triceratops skeleton and skull at the Field Museum, Chicago.
The obvious place to start is Wikipedia. As it happens Triceratops is well-illustrated on it's wiki page and there is an excellent photograph that could be used for working out proportions: 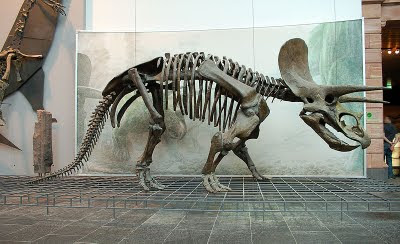 Photograph of the Triceratops skeleton in Senckenberg Museum, Frankfurt by Eva Kröcher.
Used under Creative Commons licence.
A search for papers also reveals many sources and I am assuming it's legitimate to use this material when creating reconstructions; obviously there will be some copyright issues but these should be evident when reviewing the data.
Finally, as David Krentz suggests in his excellent Gnomon tutorial on drawing dinosaurs having an actual model can be a real help in getting the feel of the animal in 3D. During the entire modelling process I've had a Papo Triceratops on my desk for this purpose. I don't use it for modelling or texturing reference (those cracked horns? yeuch!) but simply to understand how the animal occupies space. Were I sketching it would provide a useful reference for shadows and lighting and I would take photos as reference. Of course it would be very useful to build your own maquette for this purpose . . . now there's an idea.

My Papo Triceratops photographed when not fighting with my Papo Tyrannosaurus rex.
So that's the groundwork done. Next we move on to sketching and planning how we will model our Triceratops.
Posted by Stu Pond at 16:01 4 comments:

Threads in deep time; reconnecting with who we are.

Scott Sampson, a dinosaur palaeontologist at Utah University is a man who thinks big. Very big in fact, as in his latest post over at his blog The Whirlpool of Life Scott discusses how we need to reconnect emotionally as well as intellectually with our place in the story of the evolution of not only life on our planet, but the evolution of the universe itself. He suggests we can each find our own thread that links us back to where we are and where we have come from in deep time and we can do this now, in the very locality we are at any one moment.

I picked up Scott's book Dinosaur Odyssey in Border's bookstore in Chicago last year, as Mrs Stu and I were on our way back to the UK after our week in the field in North Dakota and Montana. In the book, Scott uses dinosaurs as an example of how the flows of both information (evolution) and and energy ecology create into the web of life, how this web has changed from the almost unimaginable depths of deep time to the present day. The importance of food webs, the metabolism of dinosaurs and the role of technology is all discussed to illustrate this complex, remarkable and fascinating subject. It's a holistic view of dinosaur evolution and does of course, have real relevance for us as a species as the book demonstrates; it's also beautifully illustrated.

Scott's book struck a real chord with me because it was close to a subject I had been thinking about for a long time. Many years ago I was reading Cosmos by Carl Sagan, and (I've lost the book so this is a paraphrase) one passage really made an impression. Sagan suggests that if at the very least we are nothing more that biological machines, if our thoughts, memories and characters are nothing more than the firing of synapses and release of signalling proteins in the brain and if consciousness itself is explicable and ultimately quantifiable the at the very least we are the universe made conscious. We are the universe recognising itself and contemplating it's true nature (I think the great philosopher Alan Watts first suggested this idea but that quote eludes me too - sorry). This deeply profound insight has been with me ever since I came across it in Sagan's book. 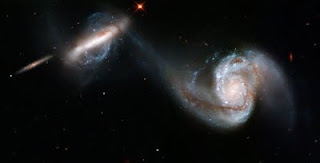 See them galaxies? That's you, that is.
Interacting Galaxy Pair Arp 87. Image: NASA, ESA, and the Hubble Heritage Team (STScI/AURA)

To my mind the Sagan/Watts view provides answers to many questions. Firstly, it provides the basis for a firm moral framework that religions suggest atheist philosophy lacks, namely that every human life is unimaginably precious as it is the universe itself and this is such a profound fact that to cause intentional suffering to our fellow humans is a transgression from the natural order.

Next, if you take away this anthropocentric bias and apply this to all living things existing in their various states of consciousness, then we soon realise how precious and valuable everything that shares our planet with us is. The web of life Scott so brilliantly illustrates in his book is a part of us and we are a part of it, which is exactly what Scott suggests in his blog.

Like Scott Sampson I'm of the opinion we can and should reconnect emotionally with our sense of being and our sense of belonging in the natural order; concepts which science allows us to explore, give context to and perhaps one day understand fully. I think we all have that sense of something larger than us is at work in the universe; some people think it might be a creator or a supreme being (or several) and religion is a product of that recognition but for those of us for whom religion doesn't provide the answer how can we address this feeling? In it's search for truth science understands already that we are indeed part of something larger than us that we recognise through intuition and emotional connection as well as through intellectual inquiry. Books and blogs like Scott's and the work of other scientists and philosophers can give us a glimpse of the awe we feel when confronted with the grandeur and majesty of the natural world - from pulsars to protists, nebulae to nudibranchs, superstrings to sauropods. 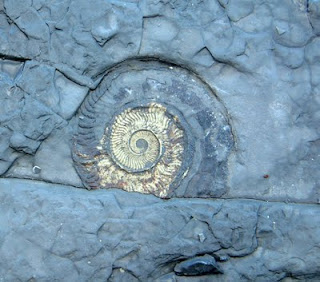 A long-lost relative in the Lower Lias of North Yorkshire, UK.

But wait! This is a paleo art blog is it not? Well the arts are themselves an expression of our sense of being. The visual arts (such as paleo art) are as much a part of this broad and wonderful outpouring of human consciousness and creativity as anything else. As I argued in a previous post, it is desirable that some paleo art should transcend simply scientific representation and strive to express the essence of the life we are depicting, simply because we can. We are so connected to our subject (in our case palaeontology and ancient life) that we should allow ourselves to connect emotionally with what we are illustrating and in fact it might be essential to a degree; a part of our nature we cannot and should not suppress to much. My day job consists of depicting the internal mechanisms of the human body down to molecular level and this often requires a high degree of scientific accuracy, but it also leaves some room for creative licence within any given rationale (even the most utterly straight representation of data will require some interpretation by the artist). This is what I will be striving for on my journey into the art of palaeontology, my way of connecting with what Stephen J. Gould called "the old ones".

The Celts of these islands had a particular reverence for certain spots in the landscape such as springs, wells, rocks and trees and they believed (and many still do) these were inhabited by spirits particular to that specific location; the roman invaders called these spirits genius loci, the spirit of place. As Scott so eloquently argues, it is by discovering our own genius loci we can, through science and art reconnect with our own story and pick up our own very personal thread in the web of life and the universe.
Posted by Stu Pond at 16:22 2 comments: