Some things send a real shiver down your spine, and for me one of these is being unexpectedly confronted with wild animals. Some years ago my wife and I were our walking in the hills near our home when we had a close encounter we've never forgotten. Our route took us past an old quarry, basically a platform delved into the hillside for the purpose of extracting the carboniferous gritstone used to pave the streets of the local towns and villages. I fancied a quick look at the exposures that were still visible despite the quarry floor having been reclaimed by nature. As we turned into the quarry we came face-to-face with a large Red Deer stag. The stag had heard us before we'd even seen it, and the movement of it looking up caught out eye. We stood a few feet away from this magnificent animal before it turned and disappeared into the scrub, leaving us with a sense of elation.

Great Britain's largest native mammal, Red Deer (Cervas elaphus) are present throughout most of Britain having migrated here around 11,000 years ago, although according to the British Deer Society website some populations represent feral animals rather than descendants of native animals. As we have extirpated all keystone predators from these islands Red Deer are thriving at present and indeed culling is necessary to ensure populations are kept in check.

Our local Red Deer herd spend most of their time in the surrounding hills (the area was part of a royal hunting forest) where they can be spotted grazing in fields in groups, often of over 30 individuals. They descend to lower elevation during the night and  some mornings it's possible to walk through the long grass and see where each deer spent the night. It was in the hope they had been around recently that I went looking for tracks with the intention of recording them using photogrammetry; I discussed the Mallard tracks I found during this same trip in my last post.

I was lucky this time and found and recorded two the two tracks presented here. They were both found at a small ford on a stream that runs down the hillside. This area is frequently trampled by the local dairy herd who use the ford for crossing a field boundary and drinking but as they are still inside at present the only tracks on the mud surrounding the ford were of deer and the paw prints of a small dog (the area is heavily frequented by dog walkers). The individuals that left these tracks are both relatively small, and might possibly have been left by a hind and juvenile, possibly one of last year's calves. Due to the lack of heavy trampling it seems only a few animals passed this way rather than a large group.

The first image is the smaller of the tracks. I've rendered both untextured and textured versions of each track recorded to demonstrate the morphology of the track and quality of the mesh. It has to be said that these are rather large files, and could probably be decimated without detrimental loss of information.

As can been seen in the two sets of images above, the meshes generated by the photogrammetry software are very detailed and very accurate, capturing sub-millimetre detail. The gaps in the mesh tend to be where overhangs occur, for instance under blades of grass or underneath overhanging areas of displaced substrate. Stone and organic detritus are very well represented.

These images further demonstrate the quality of data that can be captured using photogrammetrical techniques. Hopefully there will be much more of this to come in the future!
Posted by Stu Pond at 16:02 3 comments:

Neoichnology - whose prints are these?

I took a walk around the local area a few weeks ago with the idea of recording some traces from the local fauna, specifically tracks. Living here on the edge of the English Peak District we have quite a good range of birds and animals in the immediate vicinity, including badgers, Red Deer, Foxes and a wide variety of birdlife. There are several reservoirs in the vicinity and birds can often be spotted making their way to and from the various stretches of open water. One nearby reservoir has a heronry, and the others attract a wide variety of waterfowl including grebes, ducks, geese, moorhens and cormorants.

Riparian environments are excellent places to look for traces (and potentially analogous to many terrestrial deposits in the fossil record where tracks are found) and I found and recorded this near perfect pair of prints in the mud by a stream that flows across open farmland before entering woods and draining into a reservoir. It was a bright, sunny day (which is not ideal for photogrammetry due to hard shadows) but the images came out well, and I got good data from them and was able to generate a mesh I was very happy with. Why study untextured models? One advantage of not placing the texture is we can study morphology and other track data which might otherwise be hidden by the visual noise of the texture itself, and which can obscure details in relief. To aid the study of these details we can alter the angle of the light source for example which will enable us to see features as they cast shadows. 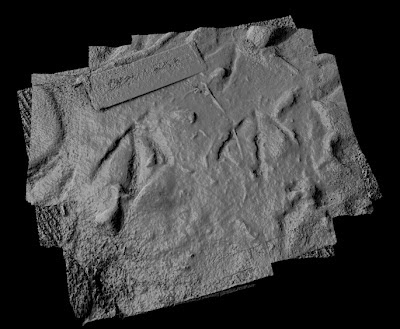 The image above is the mesh without any texture. The two prints are dead centre of the image, the rectangular object at the top of the image is the scale bar. The mud was quite soft and undisturbed except for these tracks. There is one other partial track at the top right margin of the mesh. 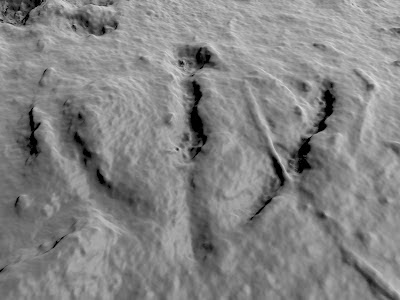 This is a close-up of the left-hand track. There is a piece of organic material that lies across the track; this was trodden on by the track maker. Notice the sub-millimetre resolution of the mesh. Also notice the displacement rims, distinct claw mark at the end of digit III (the middle one). Is that the impression of webbing or a consequence of substrate displacement when the foot was placed down? The first image shows this track from a different angle, and seems to suggest webbing was present. 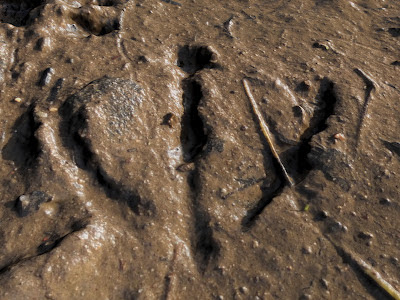 The mesh with the texture applied, all other parameters unchanged. This is not a photo, but both mesh and texture were generated in Photoscan, and rendered in Cinema 4D. We can now see that the composition of the substrate has affected the morphology of the print; organic detritus and the grain size of the sediment both have some influence on the final impression. You can clearly see the hard shadows here due to the direct sun, and a bright but cloudy day with plenty of diffuse light is better for doing photogrammetry work.

Finally, here's a seamless of the mesh rotating 360 degrees, with texture.


So who made the tracks? The obvious candidates are a goose, duck or heron. Geese do browse on the grass in local fields, so this is a possibility. Herons are frequent fliers across the area and can often be seen hunting in the fields later in the year. In fact, digit III is 62mm in length which indicates the track maker was probably a duck, most likely a Mallard, Anas platyrhynchos, as nesting pairs do inhabit the fields surrounding the stream for some of the year. Although common, I do enjoy watching these ducks as they nest in a neighbours garden in the spring and spend their time in and out of the gardens a few doors either side of her house. There is a darker side to the mallard as many people will tell you. Darren Naish covered this subject in this post over at the excellent Tet Zoo.

Next on the subject of neoichnology: Something bigger and hairier.
Posted by Stu Pond at 17:51 2 comments:

Eye to eye with the fastest animal on Earth

As someone with a love of dinosaurs, it's always nice to know the fastest animal on the planet is one of them, to be specific the Peregrine falcon, Falco peregrinus. On Easter Sunday I had the good fortune to meet one face-to-face, courtesy of the Kingsley Bird and Falconry Centre, which had a stall outside the Pavilion Gardens in Buxton. We'd gone for the book fair but the highlight of the day was meeting the Peregrine, a young female who was brought by the centre as a breeding bird and who will hopefully be raising chicks this time next year. 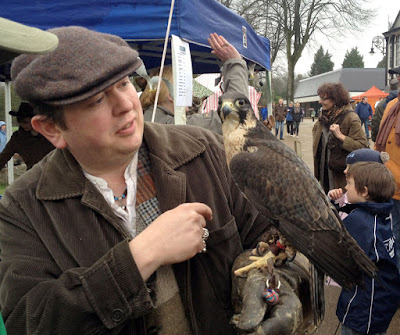 Meeting this bird up close and personal certainly made an impression. For a start, it's fascinating to look into the forward-facing eyes of the falcon, which seem to stare you down with their intense gaze. The feet are similarly interesting, with very long talons for gripping prey caught on the wing and feet with small, unusual pads sticking out of some areas of the toes, these pads are covered with tiny, spiky scales; presumably these help the bird to grip it's feathery prey more effectively. Finally, the way the bird balances on your hand feels is quite wonderful. Apart from not being too heavy it never seems to shift it's weight, although it is obviously in constant motion as I moved my arm to look at it.

The Peregrine is found worldwide, although it is currently on the IUCN Red List, as it has been extirpated from much of it's central and eastern European range, although there are signs of a recovery. Here in the UK the species is recovering from the inevitable persecution it has suffered at the hands of gamekeepers and farmers and around 1,402 pairs are currently estimated to be breeding in the UK according to the RSPB.

Although primarily a bird of cliff and crag, here in north-west England we have some decidedly urban peregrines, helped by a successful project to encourage the birds to nest in Manchester city centre (a pair did nest a couple of miles from the city centre in 1993). Last year four chicks were raised, and all these fledged successfully. I also know of at least one nearby urban centre where the species has been sighted, and indeed I met a lady who witnessed a Peregrine take a pigeon in flight one morning the main shopping street (much to her surprise), the bird landing directly in front of her with the kill before taking off again. I think it put her off her elevenses.

Next time I'm in the city, it'll be eyes skywards to see if I can spot these magnificent birds patrolling the concrete canyons they have made their home. However, I think I'll remember this marvellous encounter for a long time to come.
Posted by Stu Pond at 18:06 1 comment: