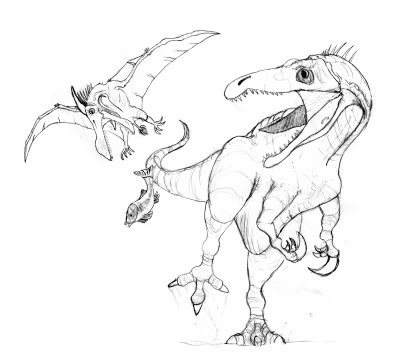 After a brief blogging hiatus due to workload and the fact I spent a few days in France with some friends pursuing my other great love, playing Irish traditional music (in fact, we played some traditional Breton music too with some of the excellent French musicians who were playing at the local Fest Noz), dancing, singing and drinking the rather fine Breton cider, I'm back at the helm of the good ship Paleo Illustrata.

I finally got the chance to finish the composition for my next illustration, and added the mystery animal mentioned in the previous post. This is the ornithocheirid pterosaur Caulkicephalus trimicrodon, described by Steel et al in their paper of 2005. C. trimicrodon is currently only known from the Isle of Wight, adding to the list of mesozoic vertebrates unique to the island and had a wingspan of around 4m. I've depicted C. trimicrodon being harried by an opportunistic Baryonyx walkeri and being relieved of it's catch of a Lepidotes sp. fish (see post of Saturday, 6th August). 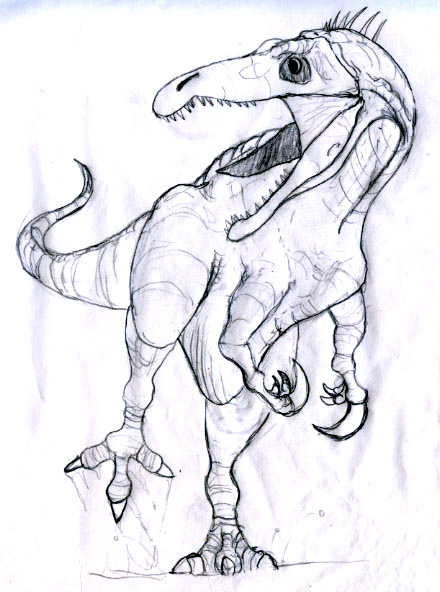 After the useful comments on the morphology of my last effort (what was I thinking with that neck?) posted on the last entry, here's an updated version of my Baryonyx rough sketch, which I've managed to do whilst waiting for 3D renders. I've actually altered a few parts of the sketch, including the forearms and some skull elements as well as giving the neck the proper proportions and used Sereno's 1998 paper on Suchomimus tenerensis, which as mentioned in the last post is now considered a junior synonym of Baryonyx walkeri. Sorry for the ropey scan.

The sketch isn't actually complete, as I need to add another animal . . . who did you think me laddo is snarling at?

A Long-Snouted Predatory Dinosaur from Africa and the Evolution of Spinosaurids. Sereno, P. et al
Posted by Stu Pond at 14:44 4 comments: 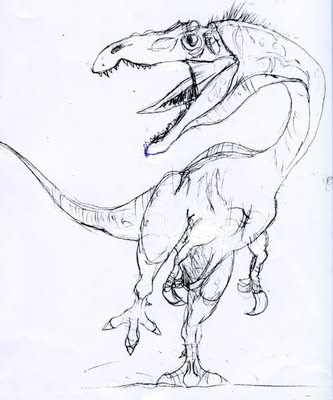 Here's a rough sketch for an illustration I'm working on of the Wealden theropod Baryonyx walkeri. B. walkeri is known from the Upper Weald Clay of Sussex and from isolated bones and teeth on the Isle of Wight, and as the type specimen was found with Lepidotes scales in the stomach region (Martill and Naish, 2001) there are reasonable grounds to speculate that it was in part at least, a piscivore.

This reconstruction is based on information from the excellent book Dinosaurs of the Isle of Wight although I've made alterations to the back which reflects findings by Hutt and Newbery (2004) which describe a large theropod vertebra with a tall neural spine which they assigned to B. walkeri, and indicated that Baryonyx had a low dorsal sail similar to Suchomimus tenerensis, which Hutt and other workers considered a junior synonym of Baryonyx.

The fascinating vertebra mentioned in Hutt and Newbery's paper now resides in Dinosaur Farm Museum on the Military Road, on the Isle of Wight. This museum has some really excellent specimens but last time I was there suffered from uninformative labelling and a general lack of consistency in the way the fossils were presented, and the whole impression was rather slapdash. Hopefully it's improved and is still worth a visit.