Exoneoichnology and photogrammetry: traces on Mars

If by some chance the human race manages to survive itself and thrive in the far future, it's likely we will one day explore the other planets in our solar system and perhaps beyond. Future exopalaeontologists and exoichnologists will have exciting jobs, looking for traces of past life on other planets. But could they actually recognise them in the field?

Neoichnology is the study and recording of modern traces to assist us in our understanding of the traces left by past life, and is an important part of an ichnologists work. The current standout work on neoichnology is Tony Martin's excellent Life Traces of the Georgia Coast, a book that is packed with insights into the process of trace making by the denizens of the barrier islands off the coast of the southern USA (Tony's excellent blog is here). For an example of neoichnological data gathering using photogrammetry see this previous post.

One technology that is very well suited to palaeontology and ichnology work in particular is photogrammetry. I've posted before on the subject and there is a discussion and primer here and here. One of the huge advantages of photogrammetry is you don't actually have to visit a site personally to obtain accurate data. For palaeontologists unable to get into the field this means we can still work on data collected by colleagues and, er, robots.

Robots? As it turns out, yes. Currently Mars has two operational NASA rovers on it. Curiosity and Opportunity are robot geologists that are roaming the surface of the red planet, sending back lots of high-quality data and changing our view of Mars on what seems like a daily basis. NASA are superb access advocates, and every image from these two intrepid machines is posted on their respective websites for us to use; Curiosity's are here.

I wondered if was possible to generate a 3D mesh from images the rovers had sent back. As it would be useful to record an actual trace I decided to find some suitable images from the hand lens imager. This natty bit of kit is basically the rover's equivalent of the hand lens we all know and love so well. It has a 4cm camera and can resolve features as small as 12.5 micrometers. Sol 629 had what I was looking for, a sequence of images that looked like they might work so I loaded them into Photoscan. The images show a hole drilled by the rover in a martial rock to extract a sample for the onboard sample analysis instruments, plus three smaller marks caused by a laser that is part of the kit that analyses the chemical composition of rock. 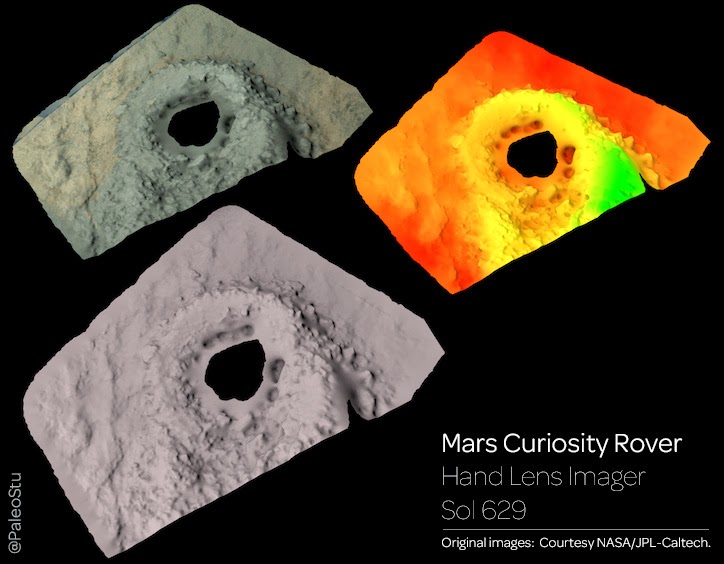 In all I used five images from the Sol 629 sequence (3715, 3717, 3719, 3721, 3723). Photoscan was able to produce a high-quality mesh of the hole, the surrounding debris rim and a part of the rock itself. The hole measures 1.63cm across. The illustration above shows the textured mesh, a plain mesh and a mesh coloured according to elevation. The movie below shows a 360 of the mesh.

So what was learnt? Well, we can use as few as five images to generate an accurate mesh. There are some issues around the lip of the hole where the software hasn't recognised the hole itself. The surrounding debris and rock is clearly represented with few artefacts; a perfectly useable mesh.

So we now have a 3D record of one trace on another planet. Exoneoichnology is born, although hardly a new science as humans and their robotic proxies have been leaving marks on other rocky planetary bodies since Luna 2 impacted on the lunar surface in 1959, and Curiosity's wheels are designed to leave the letters 'JPL' in morse code in the Martian dust. We'll have to wait for exoichnology, but hopefully not too long.

What has this got to do with dinosaurs? This exercise is further confirmation that we can use photographic data taken for another purpose to generate robust 3D data for research. Falkingham et al (2014) have successfully done this with the Paluxy River tracks and it is anticipated the technique could be used in the future for this sort of data analysis. Furthermore, if we can't get into the field and our colleagues can then some simple instruction on the picture-taking technique will mean we can have workers gathering 3D data anywhere a palaeontologist (or robot) is present. The possibilities are endless.

*I wondered about the term for the study of traces and came to the conclusion it could be 'astroichnology' or 'exoichnology', as both 'astro' and 'exo' are used as prefixes for 'geology' when studying the rocks of other planets. Exoichnology sounds cooler, so that's what I chose.
Posted by Stu Pond at 15:38 No comments: