Eotyrannus lengi and a birthday

Here is a graphite sketch I created a couple of years ago of the Isle of Wight theropod Eotyrannus lengi, a basal tyrannosauroid known from an incomplete skeleton collected in the 1990's. I had the opportunity to see some elements of the cranial and appendicular skeleton whilst visiting the geology museum at Sandown some years ago, before the fossil was described. 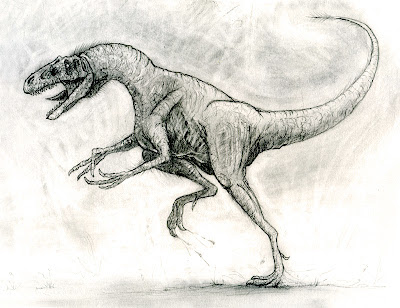 On another note, it has been one whole month since I last posted. Tempus fugit. Unsurprisingly this is because it has been a very busy month and although all seems quiet, much has been happening including a trip away and a very busy time with the day job. During this month Paleo Illustrata celebrates its first birthday, and a big thank you to all who have supported me over the last year. I've been writing posts, but none are ready for publishing . . . yet.
Posted by Stu Pond at 15:26 No comments:

Email ThisBlogThis!Share to TwitterShare to FacebookShare to Pinterest
Labels: Eotyrannus

It was way back in September when I last posted about modelling a 3D Triceratops and since then there has been much yanking and tweaking of polygons, and the project has moved on (albeit rather glacially) a step or two. In that last post I talked about the technique I would be using to make the basic mesh, which was the extruding and manipulation of polygons. I chose this technique because a) It is one I use most often and b) it keeps things organised. However, after the aforementioned post Evan Boucher commented he preferred the polygon building method, where polygons are added individually to build a mesh and this too is an excellent technique; it's work checking out Evan's excellent website to see the results that can be achieved by this method.


The image above shows the model as it stands now. This is made entirely out of quads, or polygons with four sides. The reason for this is it is easier to control the various polygons if things get complicated if they all have the same number of sides, plus when using hypernurbs the end mesh is smoother. Further down the pipeline when we want to add textures the model will be easier to manipulate to get the image maps in good order. Below is a breakdown of the model's structure.


As the screen shots show, I've only modelled half of the dinosaur and this is because I will use a symmetry object to mirror the mesh and create a whole model. This saves a huge amount of modelling time but does have some drawbacks, in that you mush keep an eye on the z-co-ordinates of your sagittal plane points or the mesh will have holes, gaps or puckers along the centre, and when finalised will have problem areas that will need fixing.

This mesh is then nested first in a symmetry object and then in a hypernurbs object. The hypernurbs object rounds the geometry in an organic fashion and each polygon, edge and point on the mesh is weighted and this weighting can be adjusted to add or reduce the objects influence, for instance the tips of the horns are virtually unweighted to make them pointed whereas the points making up the edge of the frill are left at the default settings giving them an organic curve.


The form is roughed out and refined in stages to create the shape of the animal. This involves pushing and pulling points and polygons, constant referral to the reference and turning the hypernurbs and symmetry objects on and off to check your progress and make manipulation easier. At this stage we want to keep the polygon count as low as is possible so things don't become too confusing and it is worth getting onto the habit of making incremental saves of the project as you go along so if it does get muddled or looks wrong you can go back to a previous stage and restart.


The movie above shows a 360-degree rotation of the model at this stage. It doesn't need to be perfect at this point and should be devoid of detail, which will be added later. Of course, it needs to be as anatomically accurate as possible and any comments on this subject are most welcome.
Posted by Stu Pond at 17:01 3 comments: