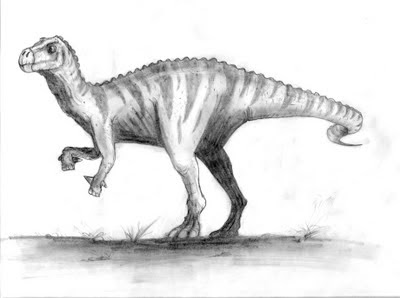 Mantellisaurus atherfieldensis
My wife and I have been regular visitors to the Isle of Wight for many years now and one of the most common dinosaur fossils found on the island are indeterminate ornithopod remains. Most of the fossils found eroding out of the Wealden strata on the southwest coast of the island and at Yaverland are fragmentary and isolated skeletal elements and are often identified as ornithopod, but assigning these to species or even particular genus can be difficult. 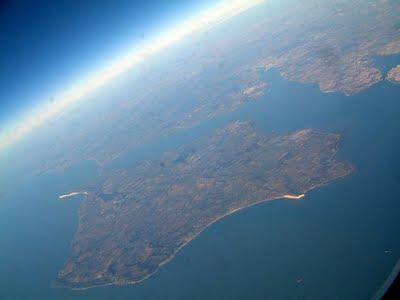 The Isle of Wight as photographed from a passing airplane by the author.
Lying off the south coast of England the island is a palaeontologists heaven with virtually all coastal exposures being fossiliferous. A chalk ridge divides the island east-west (you can the cliffs below Tennyson Down on the left and Culver Cliff on the right); exposures north of the ridge are primarily Cenozoic in age and south of the ridge they are Mesozoic, although river gravels in the southwest of the island are Quarternary in age, lie unconformably on the Wealden strata and produce bones of large mammals such as mammoth and occasional hearths of hunter-gatherers).
Almost certainly we will have somewhere in our collection a piece of Mantellisaurus altherfieldensis. Formerly attributed to Iguanodon atherfieldensis the gracile M. atherfieldensis is one of the commoner dinosaurs found on the island. In fact, the bones of iguanodonts are so common the local collectors call them 'pigs'; Dinosaur Isle in Sandown has an excellent wall-mounted specimen of Iguanodon bernissartensis (a large and more robust animal) and last time I was there the museum was preparing to display Nick Chase's iguanodont (I'm unsure of the species).
This makes it a natural choice for a sketch and I've chosen to show M. atherfieldensis as a biped, as suggested by Paul (2007).
References:
Paul, G.S. A revised taxonomy of the iguanodont dinosaur genera and species, Cretaceous Research (2007), doi: 10.1016/j.cretres.2007.04.009
Posted by Stu Pond at 17:05 No comments:

Why sketchbooks are essential

Do you keep a sketchbook? For generations artists and designers of all disciplines have kept sketchbooks as part of the their working practice and in this day and age of high technology the sketchbook is still arguably more important than any other tool an artist has at their disposal, apart from perhaps a pencil. This isn't some form of Ludditism or Stuckist technological backlash or an attempt to appear cool but the fact that the act of drawing is an essential part of the creative process and it's best performed using pencil and paper rather than computers. Dump the Wacom and pick up a 4B instead. 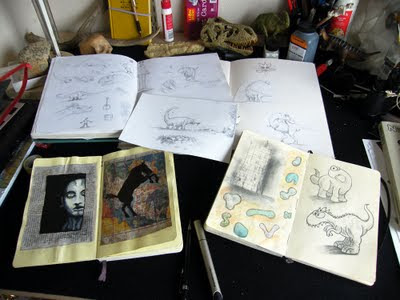 Old sketchbooks, dating back to around 15 years ago up to one finished in May.
At their most basic a sketchbook is a place for jotting down ideas and thoughts in both written and drawn but in reality they are so much more than that, and if you don't keep a sketchbook here are my suggestions for why you should:
1) Idea repository. A sketchbook is a place where you can note down ideas not just for referring back to in a day or two but also in a month or two, a year or two and even a decade or two. A sketchbook records visual ideas and moods in the same way a journal records thoughts in prose and over the years these books become a valuable resource for referring back to. As a graphic designer I often refer to old sketchbooks when rooting for inspiration and these books have become a vital record of ideas that I had when I was in a different time with different influences and a different zeitgeist. 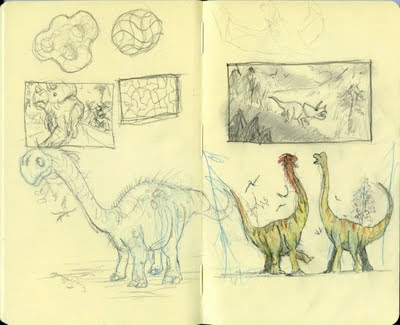 Ideas... from singing brachiosaurs, a sheepish looking cartoony sauropod, Triceratops picture compositions and a small blobby thing that lives somewhere in all our bodies.
2) Trying things out. Undoubtedly one of the main use of sketchbooks is to get as many ideas down on paper as possible when brainstorming new projects. As I said above, this is far more efficiently achieved using a pencil and paper than by working up ideas on a computer. The organic, free-flowing nature of sketching in it's roughest form enables concepts to be worked out quickly and thoroughly before being transferred to the canvas or computer for working up. I test out colour schemes, compositions and tonal schemes in my sketchbooks, I work out the forms of everything from dinosaurs, cartoon characters and organelles so when I start working on the computer it's all there, organised and thought-out. 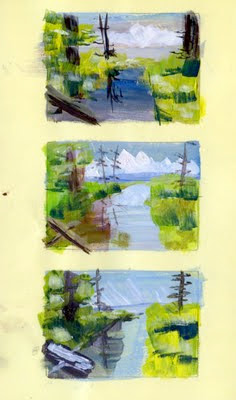 Compositional studies of Yellowstone Lake, sketched from a photo my wife took whilst we were backcountry hiking for a morning there last year.
3) Sticking things in. I stick all sorts of things in my sketchbooks, from old photos found in the pages of charity-shop books to collages of magazine clippings that I am using as small personal moodboards. I will paint over some of them with gouache, deconstruct some with pen and ink and include such oddments of daily life as bus tickets, magazine book/film/music reviews, flag day stickers and those wonderful little coloured labels you find on fruit. All this eventually builds into a rich and highly eclectic mix of visual clutter that is rewarding to browse through when a quiet moment presents itself. For example, after writing this post I'll be cutting out and sticking in my current sketchbook the picture of Paul McCartney and George Harrison that came with todays Guardian. 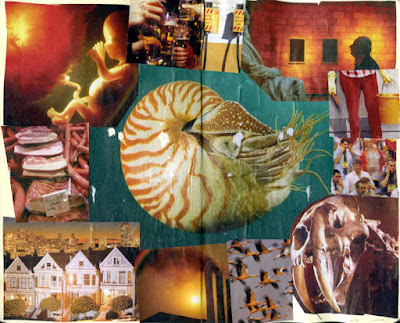 A collage of magazine clippings that I collected whilst thinking about an orange colour scheme.
The variety of image is intentional so I don't get distracted and end up wandering down one conceptual route only.
4) Practicing technique. I use my sketchbooks for testing out new drawing tools like brushpens or graphite sticks or whatever. I can experiment and test and get to grips with the qualities of pencil, try new techniques for rendering cells, skin, trees and the shiny surfaces of spaceships etc etc etc. I often sketch scenes or objects from daily life: someone in the coffee shop, cows in the field, a building, the sweep of a road or the front grille of a car. Anything that catches my eye whilst I'm out and about, which brings us to... 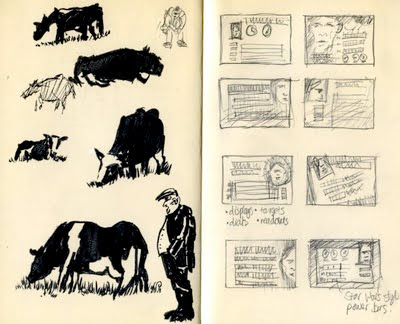 On left, cows in the field near our house drawn from life (plus a farmer, not the one who owns these cows and not drawn from life).
On the right, initial screen designs for a motion graphics project. Note sci-fi influences.
5) Portability and convenience. Yes you could use you iPad, your laptop etc but I suspect that if you do in the back of your mind is the nagging suspicion that it's not as satisfying an experience as using pencil/pen/paint/mud etc on paper, and you'd be right. Your sketchbook will never run out of batteries, if you drop it doesn't break and it won't become obsolete when the next new sketchbook comes out. It won't be a target for thieves (unless you're David Hockney or someone) and you can chuck in a bag and forget about it until the moment inspiration strikes or you want to doodle.
6) Other artist's sketchbooks. In recent years several books have been published that show the contents of other artist's sketchbooks and these can be fascinating and highly inspirational. For instance, my personal favourites are Street Sketchbook, which features the work of sixty artists and Architects' Sketchbooks, which contains the work of various architects. Both of these are books which give some insight into the creative process and how different artists approach their work in terms of idea generation and concept refinement. Also, check out the work of fine artists if you can; I'm an admirer of the work of Francis Bacon and his sketchbooks and collections of pictures give a fascinating insight into the mind of this still controversial artist.
I'm sure many of you reading this will keep sketchbooks already, and if you don't then give it a try as it's cheap and once you've started drawing in it utterly invaluable. I wouldn't recommend this just for artists and designers either, I believe everyone can benefit from carrying a sketchbook with them in the field, have one on the desk or next to the TV or when doing research. As palaeontologists we get to see some pretty inspiring sights, so make visual notes of them in a sketchbook (although a field notebook also can be used for this purpose of course). Drawing ability doesn't matter either, as this is your private book and not for public show, though draw enough and you will improve. We are visual animals and the pleasure and usefulness of keeping a sketchbook will repay the work put in for years to come.
Posted by Stu Pond at 15:42 3 comments: