The Tyrant King strides out

Here's a drawing not long completed of that old favourite Tyrannosaurus rex. This most iconic of dinosaurs played a big part in our trip to the US last year as we saw fossils and found them in the field, saw Sue in Chicago and Stan at the Black Hills Institute, which was a pilgrimage we made as we often pop in to town visit the magnificent cast of Stan that Phil Manning brought to Manchester Museum, and seeing the real thing was a real thrill, and I found standing in front of the actual fossil quite emotional. Mind you, I was quite emotional about many of the fossils I saw on our trip...

The Manchester cast has informed the pose I decided to draw the dinosaur in although I've tilted the head and lowered the raised leg a little. 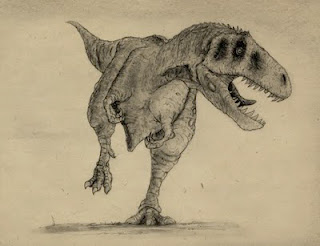 The image was drawn on Bristol board and photoshopped onto a scan of a page from a notebook which has nice texture but too rough for this sort of drawing. A bit of tweaking in Photoshop (levels and adding some tonal variation to the background, no retouching of the drawing itself) and it's done.
Posted by Stu Pond at 12:33 No comments:

One of the most interesting issues I've come across in the paleoart blogsphere is the question of whether pictures of dinosaurs are art or science, and whether it's reasonable to illustrate dinosaurs in any way apart from using the latest science. Of course, accessing the latest science has become a bit of a hot topic recently and anyone following the lively and passionate discussions that followed Greg Paul's announcement that he wanted people to stop using his skeletal reconstructions will understand many people hold the subject of paleoart very close to their hearts. 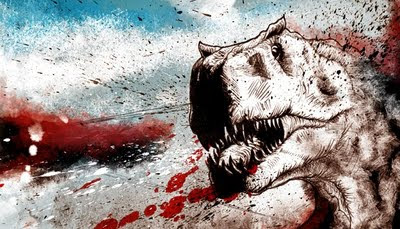 But what about the actual function of palaeoart; purely scientific representation or could it be entertainment too? Could it go deeper than simply illustrating past life (not that this is actually a simple task) and illuminate some of the less quantifiable aspects of being a living being on our planet?


The image at the top of this post is actually from one of my sketchbooks. I had just acquired a rather natty brush pen and was experimenting with the strokes and assessing the quality of line, opacity of the ink etc. At some point I doodled this comic-book version of a large angry theropod, very loosely based on Tyrannosaurus rex and not ever meant to be seen by anyone. At the time, I was doing some pitch work for the BBC and had created a look I thought might work with and add something to this image. I scanned the sketch in, loaded it up in Photoshop and off I went. This was the result; a sort of deconstructionist take on dinosaur art with a nod to Frank Miller. I quite liked it, stuck it on my work website and got a positive reaction to the image from several people and so it stayed up. However, one thing always did bother me slightly about it - it simply wasn't accurate. It was never really meant to be, but did this matter? After all, I was more after the 'spirit of theropod'* than an actual reconstruction.
Andrea Cau has argued in his excellent blog Theropda that the representation of dinosaurs in art should be purely scientific, that anything else is essentially a work of fantasy and imagination and should not be called paleoart. His superb The Decalogue of Paleoart lays out his view of what paleoart should be and for most of this I agree unreservedly; as paleo-artists our job is to communicate what we know about dinosaurs and other ancient life in a form that is easily understood and devoid of jargon so lay people can understand it (David Maas comments on the same post here and it's worth a read as Andrea clarifies some his points in the subsequent discussion). However, two of the Ten Commandments of Paleoart got me thinking:
VII - Do not create mythology
VIII - Do not create false reconstruction
Hold on a moment - these two points are of course closely related in a sense. I can understand the mythology thing to a degree, perpetuating old myths and tropes (dragging sauropod tails etc) but am not so sure about "do not create false reconstruction"?  Even given the vagaries of Google Translate's sometimes eccentric interpretations this seems clear: Do not depict dinosaurs in any way except with complete scientific accuracy. Now, I don't actually disagree with this as for paleoart to be of value it must be done properly. If you're illustration for a paper, journal or media project then you've got to get your hands dirty and do the research and make sure what you're producing is scientifically accurate - a scientific illustration. But . . .
. . . art is not science. It's a creative as well as technical process and regardless of how scientific you want to be all that information and data is going to passed through that wonderful, complex and mysterious organ that is the human brain. When an artist creates a work they're bringing a whole panoply of conscious and subconscious influences to what they put down on paper, model in a computer etc. In the case of technical drawings for papers etc this filter is dialled right back (it has to be - no room for flights of fancy here) but for much of the rest of the time it's on and working flat out, bringing all an artist's experience and philosophy to bear on the subject at hand. Even in paintings and illustrative reconstructions the filter will be hard at work and is in a very real sense creating a mini-mythos that enables the artist to imagine the creatures he's depicting as living, breathing animals. Even if the animal is depicted accurately there is going to be one whole shedload of speculation and supposition in that depiction, any of which could be false.
It's fair to argue that so much is unknown we should be daring in our art. The work of such artists as Luis Rey and Bill Stout could be called mythological as a large amount of the reconstruction is speculative, the execution is stylised yet these images give life to the animals and communicate the work done by palaeontologists in the labs and in the field. These accurate reconstructions but also highly speculative in many ways; they are also powerful examples of good paleoart.
So perhaps it's OK, even unavoidable to create a certain mythology when depicting ancient life as living plants and animals. Perhaps my picture does convey something of the savagery of a large carnivorous dinosaur in a feeding frenzy (or perhaps it fails utterly?), gives some insight into it's inner nature - a subject that will forever be dominated by speculation. I would suggest it would even be desirable in paleoart to have some real left-field artist representations, something more abstract that might communicate the more speculative aspects of ancient life via emotion, intuition and the other influences artist have always brought with them to their work. In some respects, any and all reconstructions could be called false, but perhaps within the field we call paleoart there is place for more than purely scientific interpretation. No art exists in a vacuum, paleoart sits in an uneasy position between science and art and by definition consists of both in terms of technique and philosophy.


So should we call it paleo art, or scientific illustration? 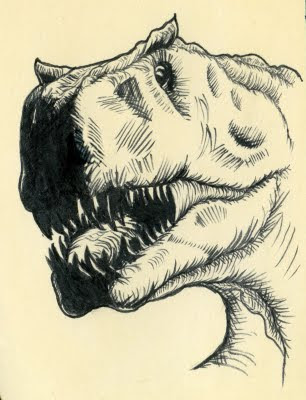 The original ink sketch.
*I have no firm idea what this is. Sort of the quintessence, the nature, the theropodian id. It is by it's very nature undefinable, but it must have been there as it's there in every other living thing, from protists to blue whales.
Posted by Stu Pond at 16:00 8 comments:

I'm still very busy with the day job so not much time to do longer posts, but I thought this was worth a mention. It's a live web feed from Loch of Lowes in Scotland and the camera is trained on an Osprey's nest. This is a work-killer; it's fascinating to watch the birds building their huge nest (the size of a double-bed apparently) and observe the female (I presume) re-arranging the nest materials to her liking. With live sound too, this is truly wonderful: Loch of Lowes Osprey Cam.
Isn't technology great when used like this?
Posted by Stu Pond at 16:03 No comments:

The new edition of the Boneyard has been posted by Sam Wise over at Sorting out Science, so head on over and get the latest on what's what in the paleoblogosphere. Great stuff.
Posted by Stu Pond at 09:19 No comments: