The SVP and the surreal world of Vegas: a first-timer's perspective.

I haven't posted for a couple of weeks but think I have a valid excuse, as Mrs Stu and I boarded that crazy bird and flew out to Las Vegas and the annual SVP meeting for the first time ever.

Wow! Where to start . . . Sereno's trampolining elephant? Fred, Barney, Wilma and Betty plus a bizarre assortment of dinosaurs selling us stuff? The spooky piped voices in the venue loos? Nope . . . it has to be the field trip. 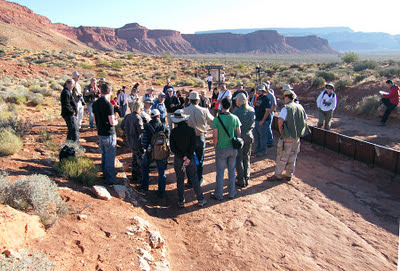 We were lucky enough to be able to attend the field trip to Utah and the Arizona Strip to look at dinosaur trackway sites from the Early Jurassic, and looking at the Triassic-Jurassic transition. The trip was led by a group of excellent palaeontologists: Andrew Milner (St. George's Dinosaur Discovery Site); Jim Kirkland, State Paleontologist for Utah; Neffra Matthews and Brent Breithaupt of the Bureau of Land Management, Martin Lockley, Professor of Geology/Paleontology at the University of Colorado and Tylor Birthisel, Grand Staircase-Escalalnte National Monument. We spent three busy and exciting days visiting dinosaur trackway sites, learning the technique of photogrammetry to gather data and spent time at the small but perfectly formed St. George's Dinosaur Discovery Site, which has been built over an in situ track site in the Lower Jurassic Moenave Formation and boasts a world-class collection of trackways and footprints, as well as body fossils.

The field trip took us to Zion National Park, Moccasin Mountain as well as sites in Arizona and the spectacular Warner Valley, amongst others. The whole excursion was well-organised, enjoyable and above all informative, with the leaders being excellent guides and the other participants being great people to be on the road and in the field with. I could bang on for hours about how much I enjoyed these three days but I'm sure you get the gist.

Returning to Vegas we got back in time for Jack Horner's address to the meeting on Tuesday evening and then a beer or two before the meeting started in earnest the next day. As first-timers to the SVP Mrs Stu and I took some time in getting up to speed on the finer points of how to get the best from the meeting, although we'd got it sussed by the final day. The hub of the meeting is the room with the registration, stalls and where the poster sessions are held; refreshments are served here and tables are available for the delegates to sit and talk. It's where everyone meets, networks and takes a break from the presentations, where the noticeboard is and later in the day, where the beer is.

It soon became apparent there was far too much happening to be able to see and hear everything we wanted to hear, so it became a case of pouring over the programme and checking abstracts on the iPad to get some sort of schedule. I still feel we missed so much, yet we were busy every minute of every day of the meeting and saw some excellent, exciting presentations, many of which have been discussed elsewhere, but I particularly enjoyed Cutler's presentation on saurischian death poses, Allain's report on a new site in France with a fauna that corresponds to the Wealden of Western Europe and contains a new taxon of ornithomimosaur, Van Buren's work on ornithischian front limb posture, Goodwin's conclusion that T. rex was an endothermic heterotherm and so much more . . .

If I had any criticisms they would be that Vegas was rather costly to say the least (hooray for Walgreens, Bill's and Denny's!), and free wi-fi really should have been made available to attendees gratis; the cost for the service provided by the hotel was ridiculous. But then that's Las Vegas in a nutshell: a huge grinding machine dedicated to reliving you of your hard-earned. It's huge (Caesars Palace alone takes up 33 acres), tasteless on a scale I never thought possible (Blackpool's lights look positively anaemic in comparison), windowless inside the resorts, impressive at night and boasts 24-hour noise being piped from every direction, even in the open air. But it's a sight to see, to be sure.

The really great thing about the SVP was meeting so many people I wanted to talk to, to be amongst people whose passion and knowledge was an inspiration to those of us who wished we were more involved in the field. It was great to meet other bloggers and artists whose work I respect enormously, palaeontologists whose work I had admired for many years and whose books I have avidly read and learnt from and the many volunteers and researchers who work in the field not for financial gain or as a career but give up their own time because they are passionate about the subject. I'll resist the urge to name drop but just say it was an pleasure and an honour to meet everyone. 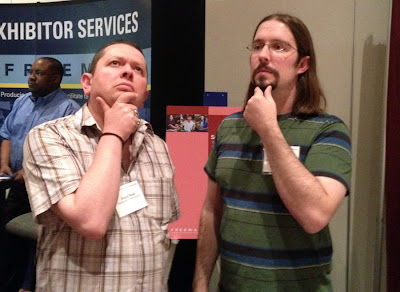 Stu and Scott Hartman ponder the finer points of skeletal reconstructions,
dinosaur locomotion and whether to have a Heineken or a Corona Light.

At the SVP we met old friends, renewed friendships formed in the brotherhood of the field and made new friends I hope to keep in touch with for years to come. Needless to say there were plenty of people I'd like to have spoken to but missed. It was a week of paleo-heaven and as I write this my mind is already straying to the subject of costing out next year's trip to the meeting. All being well, in a year's time I will be writing about how brilliant Raleigh was. 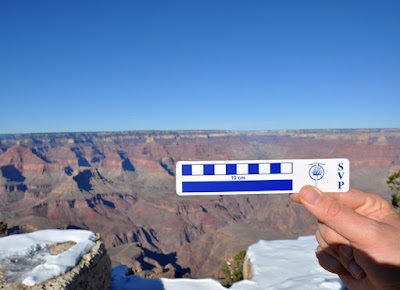 Ah, the fabled SVP scale bar! Here shown putting it to good use as Stu makes sure he has something
in shot to illustrate the scale Grand Canyon on a trip there a few days after the meeting.
After analysing this and other data gathered at the site, he came to the considered conclusion
that the canyon is "bloody huge, and no mistake".
Posted by Stu Pond at 15:01