Sometime in the late seventies, a small boy who was visiting his grandparents in London was taken on a red Routemaster bus into the city, and guided by his Grandma into a cathedral-like building standing on the buys road where the bus dropped them off. Walking up the steps, into the vast atrium he was confronted by the sight of a giant, long-dead animal. He knew what he was looking at was a Diplodocus skeleton, a type of long-dead reptile called a dinosaur (he recognised the long neck and long tail from his many books on dinosaurs).  What he had never realised however, was just how big it was. It was immense! What did it eat? Where was it from? Were they all this big? Why aren't there any dinosaurs left? He wanted to know more, and his Grandma patiently took his hand and led him into the room of giant skeletons and huge bones. Thirty-five years later, he's as interested and fascinated by dinosaurs as ever, as excited by new discoveries and the science and the fieldwork and the art and . . . this is why communicating science is massively important. It inspires, invigorates and encourages people of all ages and walks of life to indulge their natural curiosity and find out – why? how?

Many of us had our first real experience of science when as children we were taken to a museum to gaze, wide-eyed and fascinated at the various exhibits. I'm sure that I'm not alone when I say that walking through the dinosaur halls of the Natural History Museum in London was a defining part of my childhood. Dinosaurs looked great in pictures, but when you see the skeletons – wow! The seed of a lifelong passion had been planted years before, but seeing the remains of these wonderful animals up close and personal certainly made it take root beyond any doubt. The reality was better than the books. 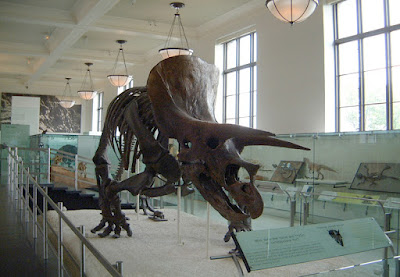 Ornithischian Hall, American Museum of Natural History, New York.
The best museum in the world? For me, the best I've ever seen as it contains
so many iconic fossils, plus a collection of feathered dinosaurs was there when we visited in 2001.

Museums are one of the main ways scientists and especially palaeontologists, can communicate the results of their research to the wider public. Riding on the back of the public's fascination with all things prehistoric much of the knowledge teased from the bones by the long labours of workers in the field and labs is disseminated through these august institutions. But is it always effective? 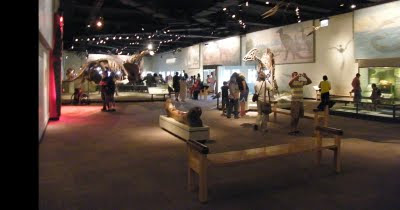 The dinosaur hall at the Field Museum, Chicago.
Face to face with a Stegosaurus and Charles Knight's iconic murals,
plus Mould-O-Rama machines in the basement - what's not to like?
The prep lab was empty all day when we visited - not like Dinosaur Isle in the UK.
Although I haven't been to the NHM in London for several years, I was fortunate enough to visit The Field Museum in Chicago and The Black Hills Institute in Hill City, SD last year and the American Museum of Natural History in New York just under ten years ago. What all these museums have in common is the displays feature one thing more prominently than anything else: the actual fossils. In fact, they were by far and away better in terms of presentation and information dissemination than virtually any other museums I have visited, relying less on cheesy animatronics (although the Field Museum had a room full of these that used motion sensory technology to react to you as you walked past them - impressive to be sure but those hatchling Triceratops - ugh!) and placing the emphasis on the fossils themselves. Of course these museums represent possibly the greatest palaeontology exhibits in the world with incredible specimens and resources to match . . . except the Black Hills Institute is a small, privately owned concern and as well as excellent fossils it had the best graphic panels of any of them. 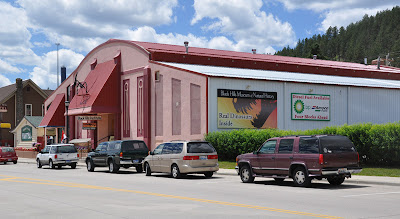 Here be dragons: The Black Hills Institute, Hill City, South Dakota.
Small but packed to the rafters with superb fossils and casts.
We went to see Stan the Tyrannosaurus rex in the flesh (er, bone) after seeing the cast many times
in Manchester Museum back in the UK. We were not disappointed.
Did I mention the gift shop? Bring mucho cash.

The BHI panels were well-designed and informative, containing photographs of the excavations and prep of the various exhibits, as well as site maps showing the distribution of bones in the bed. There was no sensationalism, just information and fossils. I can't recall seeing any interactives in the main hall and it might have been good to get some sort of visitor operated attraction alongside the fossils; these can be quite compact but contain lots of information. They needn't be just for kids either, perhaps illustrated catalogues of the museums specimens and accessions that could be accessed in the fossil hall by researchers and public, complete with description, acquisition and provenance data for example. Combine this with reusage applications on the internet and a powerful new tool will be at the public's and academic community's disposal.

Over here in the UK, outside of the capital our dinosaur museums are altogether more modest but no less interesting. Leading the way in recent years is Dinosaur Isle in Sandown, on the Isle of Wight. Under the curation of Steve Hutt the museum has emphasised the fossils themselves rather than simply animatics (although the kids love 'em!) and through the combination of information-packed graphic panels and an interactive kiosk they communicate the science of the island's dinosaur species very effectively. More than that though, the public can look directly into a working prep lab and talk to the preparators and bring in their own fossils for identification without having to leave them and come back. This direct interfacing with the public is a strength other museums could do with taking note of. 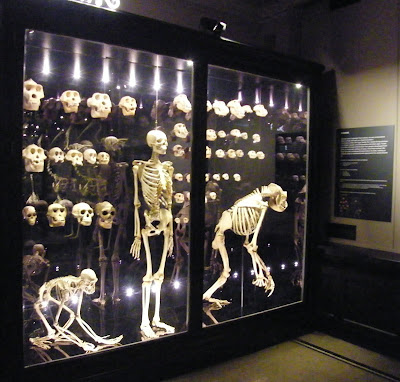 The primate case in the newly refurbished Life Galleries at Manchester Museum, UK.
One of my favourite displays ever. I want this in my house.

My nearest large museum is in Manchester and has a wonderful old Victorian fossil hall, which houses a cast of the BHI's Tyrannosaurus rex Stan, controversially positioned in full running pose. This magnificent mount (I sometimes go up to gaze in slack-jawed awe at it like the small boy I was thirty-five years ago at the NHM) is surrounded by a small but perfectly formed collection of excellent fossils, including specimens from the Burgess Shale, Wigan and some superb marine reptiles from the south coast of England. There are some gems in here and I especially love the dinosaur footprints which show the texture of the soles of the animals tridactyl feet. The life galleries have been recently re-jigged with the old cases of stuffed animals removed and replaced by cases with a more considered thematic thread running through them. In truth, I'm not overly fond of these as I think one or two are a tad abstract (featuring origami birds rather than, er, stuffed birds) and I would prefer seeing actual specimens being displayed; if it comes to science over fuzzy concepts of 'life' I would suggest the science speaks for itself. The primate case display is utterly brilliant though and thankfully the Cassowary skeleton is still there (I can't help thinking that now there is a back room in the museum that contains some wonderful specimens I'll never see again . . . sigh), albeit the lighting's a bit gloomy. Looks like those skeletal reconstructions are going to get ever more difficult to do. 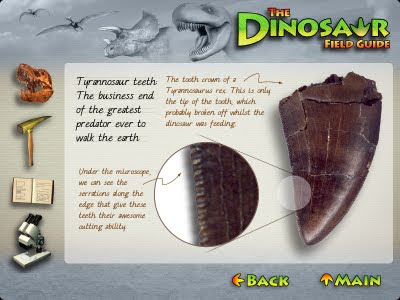 Screen grab from a proposal for a touch-screen museum interactive on my favourite subject, dinosaurs.
The large icons on the left-hand side were designed to be easy for little fingers to press.
Note: The 3D models dinosaur models used here were stock ones, the hammer and microscope my own.

Of course, much of what was written in my last post regarding the advantages of working with science-literate designers will is relevant for museum work too. To avoid repeating myself I'll assume you've read my previous post on the moving image. In that post I suggested working with science-literate creatives can enhance and improve the communication of concepts and current research because these creatives understand the science and can assist in the creation of effective and cost-conscious information delivery methods (there, I repeated myself). Many museums have their own in-house graphic units (perhaps shared with a university) that have designers who understand the subjects they are communicating. In this case, 'understand' means some knowledge of the subject and scientific methodology; this knowledge doesn't have to be extensive but it should be enough that the commissioning expert doesn't have to re-educate the designer whilst delivering a brief - this is important. However, there is a move towards outsourcing as the austerity measures we are experiencing at the moment begin to take effect. Once more, it's worth considering using independents rather than large studios as they will make your budget go much further with no loss of quality; if a larger team is needed to complete a project an independent can organise one or recommend another.

I was going to address symposia and other meetings in this post, but as this has gone on far longer I'll write a separate post for that subject. For now though, ponder over this concept: reusage.
Posted by Stu Pond at 17:44